Surakarta Administration is exploring potential sister city partnership with Kyoto, Japan. Both cities are considered having many similarities in culture and historical buildings. The Joint Crediting Mechanism (JCM) Team has done a presentation in front of City Mayor Acting Official and all of local government agencies at Mayor’s Meeting Room, Friday (28/8).

Head of Commercial and Financial Partnership Division, Coordinating Ministry in Economic Sector, Yuana Rochma Astuti said, the partnership between Surakarta and Kyoto is not limited to culture.  There are several projects which both parties will implement such as waste management, emission test, and transportation. The partnership aims to bring Surakarta toward cleaner and better maintained city.

Adding to Yuana, The Head of Environment Office of Surakarta, Widdhi Srihanto said that Surakarta Administration will look further before committing to partner with Kyoto. They will explore more on legal aspect and its usefulness to citizen and Administration of Surakarta.

IUWASH PLUS is a sub organization of United States Agency for International Development (USAID).

IUWASH PLUS has 4 pillars of activities which are: behaviour, clean water, sanitation, funding.

Deputy Mayor of Surakarta, Achmad Purnomo conveyed the speech on behalf of Mayor FX Hadi Rudyatmo who couldn’t attend due to other important duty.

Purnomo said that public awareness about the importance of clean water is just as crucial if not more.

“There is one other thing that matters. The awareness of the society itself,” he said.

The partnership document between Surakarta Administration and IUWASH PLUS is also signed at the event.

The event itself was held at Sri Manganti Room at Surakarta City Hall from 10.00 to 12.00 Indonesia Western Time.

Mayor of Surakarta Signed an MoU With PLN

The signing, The Mayor said, will be a crucial stepping stone for the development of Waste-to-Energy Power Plant (PLTSa). Surakarta Administration will start taking measures following the signing. “It is a remarkable decision to sign the MoU. Total utilization of 17 Hectare of landfill will soon be materialized,” he said.

Referring to Presidential Regulation No 18/2016 there are several other cities beside Surakarta that is appointed as early implementer of PLTSa. Namely Jakarta, Tangerang, Bandung, Semarang, Surabaya, and Makassar.

Surakarta – General Administration Assistant, Dra. Eny Tiyasni Susana, MM on behalf of Surakarta City Secretary, Ir. Budi Yulistiano, M.Si emphasizes that it is important for every civil servant to fully understand every step and mechanism necessary for overseas travel and to do it in a timely manner. “We’ve imposed stringent sanctions to all of them who break the rule. That is to say every overseas travel must be done in compliance with the current regulation,” she said at the opening of Promotion of Overseas Travel Guideline for Civil Servant, Head of Municipality, Deputy of Municipality, Head and Member of Municipal Regional House of People’s Representatives of Surakarta at Paragon Hotel and Residences Surakarta, Thursday (28/4).

Speaking as the first panelist, Had of Partnership Division, Governmental Bureau, Regional Autonomy and Partnership of Secretary of Central Java Province Danang Purwanto, SE, M.Si said that Government has clearly laid out the regulation and mechanism to outline the procedure and mechanism for traveling overseas in Minister of Internal Affairs Regulation Number 29/2016 about Permit Recommendation for Official Overseas Travel. Meanwhile, The Ministry of State Secretary has released an application for Android and iOS called SIMPEL (Information System of Official Overseas Travel) to apply for official overseas travel permit. “We hope the innovation will facilitate the application for official overseas travel permit that previously considered costly and time consuming,” said AM Ardiyanto Sumardjono, SE. M. Hum, The Head of Technical Foreign Partnership  and Administrative Support Division, Technical Foreign Partnership, Ministry of State Secretary as the second panelist.

Handout can be acquired from the link below: 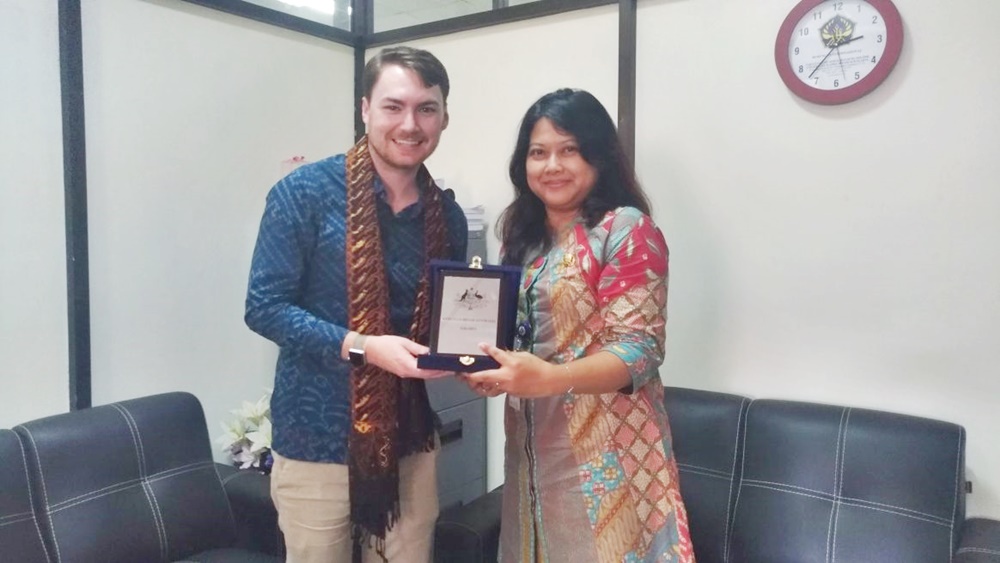